Miami River marinas, restaurants, inns, as well as, historic shipyards that provide heavy lift capability where yachts, commercial and government vessels from around the world schedule regular inspections, repairs, paint, repowering and remodeling, all serve residents and visitors from around the globe.

The Miami River is a key transit point for goods destined for the islands of the Caribbean and the Atlantic ports of South and Central America.  At its busiest, Miami River shallow draft cargo ships make as many as 2000 movements in and out of the river annually, an average of 5 entries or exits a day.  Miami River cargo ships call on more than 100 ports throughout the Caribbean basin, Central and South America.

The Miami River marine industries generated a $2.9 billion dollar output, $1.5 billion in income, 24,000 related jobs and $136 million in tax revenues to the State of Florida.

The MRMG advocated for the recent Miami River Maintenance Dredging Project—funded by the US Congress, State of Florida, Miami-Dade County, and the City of Miami–kicked off in 2004, and was completed in 2008.  This maintenance dredge is a part of a larger plan to improve the river's overall environment and the recreational, commercial and industrial viability of the Miami River's federal navigable channel.  The now-deepened channel to 15 feet allows larger recreational, commercial and government vessels to travel the waterway.  Cargo ships can be loaded to full capacity, and less dependent on the tidal flow.   Early reports reflect that the Port of Miami River ranks fifth largest in shipping volume within the State of Florida.

Beginning in 2003 and continuing today, the Miami River Marine Group members have invested in large-scale security initiatives for terminal security improvements and a river-wide surveillance system for terminal operators, the US Coast Guard and law enforcement.  Most recently, US Homeland Security grant funding awards have led to advanced security and surveillance equipment, vessel monitoring system and security gatehouses. 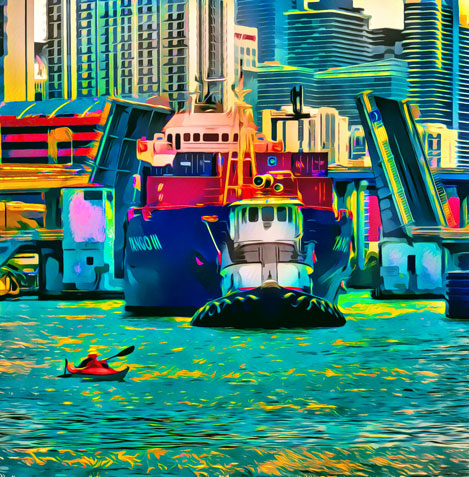